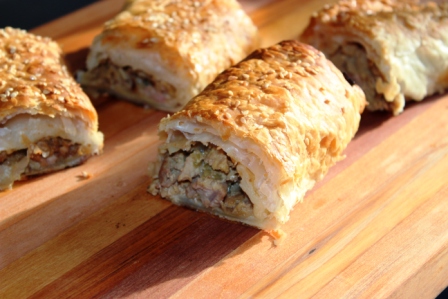 These happened by accident, I had a pork chop in the fridge but it wasn't going to be enough for the farmer and me to have for tea so I had to think of a way of making it stretch a little further. The farmer loves sausage rolls so I thought why not give them a try with diced pork chop instead of pork mince. We have found a winner here my friends, tasty and didn't take long. One chop made two rolls the width of my oven tray which meant not only did it stretch for dinner, there was a couple left for the farmer's lunch the next day! These would be great to wheel out for any time you need to feed extras.

Preheat the oven to 190 degrees Celsius. Line a baking tray with baking paper.
Chop the onion and leek very finely. Cook  the onion and leek in the olive oil at a medium heat for about three minutes until softened. Set aside to cool.
Roughly chop the bread and place in a bowl. Pour over the milk and leave for 2-3 minutes. Mix the bread around so that there is no excess liquid. While that is soaking, take your chop and cut all the meat from the bone. Chop this as finely as you can so it looks like coarse mince. Now add the chopped pork, onion, leek, parsley, pepper, salt and two eggs to the bread in your bowl.
Mix with your hands until it is all combined (make sure your hands are clean!).
Take you two sheets of pastry, lay them out and arrange half of the mixture on each sheet in a sausage shape along the edge closest to you. Take your third egg and beat it up in a cup, use this to brush the far away edge of the pastry so that it will stick shut. Now roll up and press to secure. Repeat with both sheets.
Now you can choose whether you cut the rolls up at this point or bake as one big sausage and cut up after cooking ( I cut it up after but either if fine, before cooking is less messy because you don't get pastry flakes everywhere). Place your rolls seam side down on a baking tray and brush with the remaining egg. Sprinkle with sesame seeds and bake for 15-20 minutes or until golden and puffed.
Serve with tomato sauce. 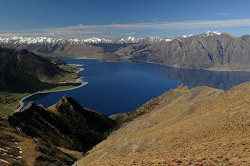 Who is this country cook?

Abby Shaw
The inspiration for this blog (and who knows maybe one day a book) is all of those country kitchens out there that I have had the pleasure visiting, to eat, drink cups of tea and/or pinot noir, cook in, cry, laugh and gossip in, shoo the dogs, chickens, kids and cat from, that have history, heart and personality. But most of all this is inspired by the wonderful people that cook in those kitchens, the ones that have been kind enough to share their recipes and knowledge, that taught me that baking soda takes the sticky stuff left by labels on jars off, the ones that poured the wine, and that have shared so much more than a meal with me. The idea of this blog is to share some of that magic with all of you. There are a few laughs, some handy tips and of course some darn good food to be had, so enjoy